The Hong Kong courts have developed over time three core requirements by reference to which the court assesses whether or not a good reason for making a winding-up-order against a foreign incorporated company in Hong Kong has been demonstrated.

Previously, it appears that with the debtor foreign company having a listing status in Hong Kong, it would always be able to satisfy the Hong Kong Court on the three core requirements.

It seems that this assumption could no longer be made in view of the recent decision in China Huiyuan Juice Group Limited [2020] HKCFI 2940, in which the Hong Kong Court of First Instance considered the second core requirement.

It is common for corporate groups with businesses in Mainland China and listed in Hong Kong to adopt a group structure such that (i) the listed holding company incorporated in an offshore jurisdiction holds one or more layers of wholly owned subsidiaries incorporated in offshore jurisdictions and/or Mainland China; and (ii) underneath such subsidiaries is a web of Mainland incorporated subsidiaries which hold the group's assets and conduct its business. When such corporate groups are in financial difficulty, creditors will petition to seek a winding up order or the group will initiate to restructure the debt (commonly through the appointment of soft touch provisional liquidators).

In the China Huiyuan Juice case, Harris J held that the Petitioner has not demonstrated a real benefit that it would gain from the appointment of a liquidator in Hong Kong over China Huiyuan Juice Group Limited (the "Company") and consequently the second core requirement was not satisfied.

The Petitioner issued a petition against the Company on the grounds of insolvency by relying on an undisputed debt arising from a default under a convertible bond. There is no dispute that the Company is insolvent. The question before the Court is whether to make an immediate winding-up order or grant an adjournment.

Harris J made the following comments and observations in respect of the second core requirement:

It appears to be more difficult now to put a foreign incorporated listed company into liquidation in Hong Kong. In many cases, demonstrating a real benefit may not be easy because of the issues raised by the court in the China Huiyuan Juice case.

A petitioner issuing a winding up petition in Hong Kong against a foreign incorporated company listed in Hong Kong will need to recite in the petition and evidence adduced the facts and matters relied on as demonstrating a real benefit. If it is asserted that the realisation of the value of the listing constitutes a real benefit, it will be necessary to adduce evidence demonstrating that on balance this will prove to be the case if a winding-up order is made. It will not be sufficient to file an affirmation in which the deponent simply recites this to be his or her belief.

Hong Kong assets directly held by the debtor company would be the most straightforward way to satisfy the second core requirement, but it is not always easy for a petitioner to have access to information about the debtor company's assets in Hong Kong.

Lexis Advance® Hong Kong Practical Guidance provides up-to-date practice notes, precedents and know-how from specialist solicitors and barristers so you can work efficiently and provide advice with confidence. It also contains exclusively written content by trusted experts in the field. Stephenson Harwood is one of our many expert contributors from a range of Hong Kong legal leaders.

Alexander is a partner in the litigation team. He practices dispute resolution with particular focus on insolvency and commercial litigation. He is a Fellow of INSOL International and holds a specialist qualification in insolvency awarded by the HKICPA. He sits on the Insolvency Law Committee of the Law Society of Hong Kong.

Alexander is also a Fellow member of the Chartered Institute of Arbitrators and an accredited general mediator of the Law Society of Hong Kong.  Outside his job, he has taken up appointments as panel members of government appeal tribunals, namely the Appeal Panel (Housing) and the Resolvability Review Tribunal. Jeannie is an associate in our Hong Kong litigation team with a focus on insolvency and restructuring matters, employment law matters as well as commercial litigation. She has experience in advising insolvency practitioners and companies on a range of contentious and non-contentious insolvency and restructuring matters. She is also involved in all aspects of commercial litigation including pursuing and defending civil claims, enforcement of judgments, seeking injunctive relief and pursuing tracing claims. 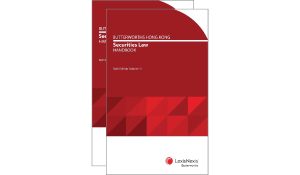